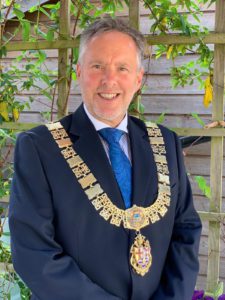 At its Annual Meeting of 5th May, Felixstowe Town Council elected Councillor Mark Jepson as the Mayor of Felixstowe for the Municipal Year 2021/22. On the same evening Cllr Sharon Harkin was appointed as the Deputy Mayor.

On accepting the office of Mayor, Cllr Mark Jepson, said:

I was very proud to receive the support of my fellow Councillors. This past year has proved so challenging for everyone, but it has also shown how adaptable we can be when needed. Our local businesses and organisations are now adapting to a post-lockdown world and, together, we can aid their recovery this year.

Last year I managed 154 Mayoral ‘engagements’, although a large proportion of these were done virtually and published on the Visit Felixstowe Facebook page, I did manage to reach a broader section of the community than I might have done during a ‘normal’ year. This provided a valuable insight to the challenges I referred to earlier and it was truly humbling to see the commitment shown by so many individuals and organisations – I look forward to continuing to develop these relationships.”

In his incoming announcement, the Mayor confirmed that the charities chosen for the previous Municipal Year 2020/21, the Felixstowe branch of Citizens’ Advice and the Felixstowe Carnival Association would again be his chosen charities for the year 2021/22.

If you would like the Mayor to attend a function in Felixstowe, or to simply ask him a question, please contact mayor@felixstowe.gov.uk

If you would like the Town Mayor to attend an event you may be organising please download and complete the Mayor Engagement Form and return to mayor@felixstowe.gov.uk.

Mayor’s Civic Service
A special church service is held to bless the new Mayor which distinguished guests from the local community are invited too.

Mayor’s Civic Reception
The new Mayor welcomes distinguished guests from the local community and announces the charity (or charities) they will be supporting during their term in office.

The Mayor of Felixstowe  Charity Fund is a registered charity no: 1184138.

In addition, the Mayor presents the Civic Awards .