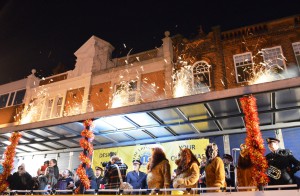 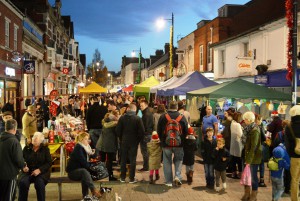 The Magic of Christmas

Christmas is a magical time of year in Felixstowe, with thousands coming from across the region to see the Official Christmas Lights switch on and Craft Market event which will be held in 2019 on Saturday 30th November 2019 at 5pm. The fantastic event is organised by Felixstowe Lions Club and supported by Felixstowe Town Council. The Lights will be switched on by the Mayor of Felixstowe from the event stage at the Triangle, Hamilton Road, Felixstowe.

Come and see the fantastic range of gift, food and charity stalls all along Hamilton Road to the Triangle Canopy. If you are interested in having a market stall at this event please contact Sarah Gooch

Santa’s Grotto, carol singing and live entertainment takes place throughout the afternoon. A children’s candlelight parade (starting at 4.30pm) from the Orwell Hotel leads up to the Christmas Lights switch on. Admission is free.

Please note: To coincide with Christmas lights ‘switch ons’ and other festive events across the district over the coming weeks, East Suffolk Council is offering free parking in council-owned car parks at selected times on the following dates:

At the beginning of December, Santa and Rudolph visit Felixstowe and tour the town’s streets and homes in their sleigh every weekday evening between 6-8.30pm.  You can see the routes by visiting www.felixstowerotaryclub.org

The synthetic Ice Rink, provided by the Town Council and sponsored by the East of England Coop, will return to Great Eastern Square from Friday 20th – Monday 23rd December 2019.

There will also be rides for smaller children and stalls serving food and drinks.

Admission free (including free skating). No need to book, just turn up.