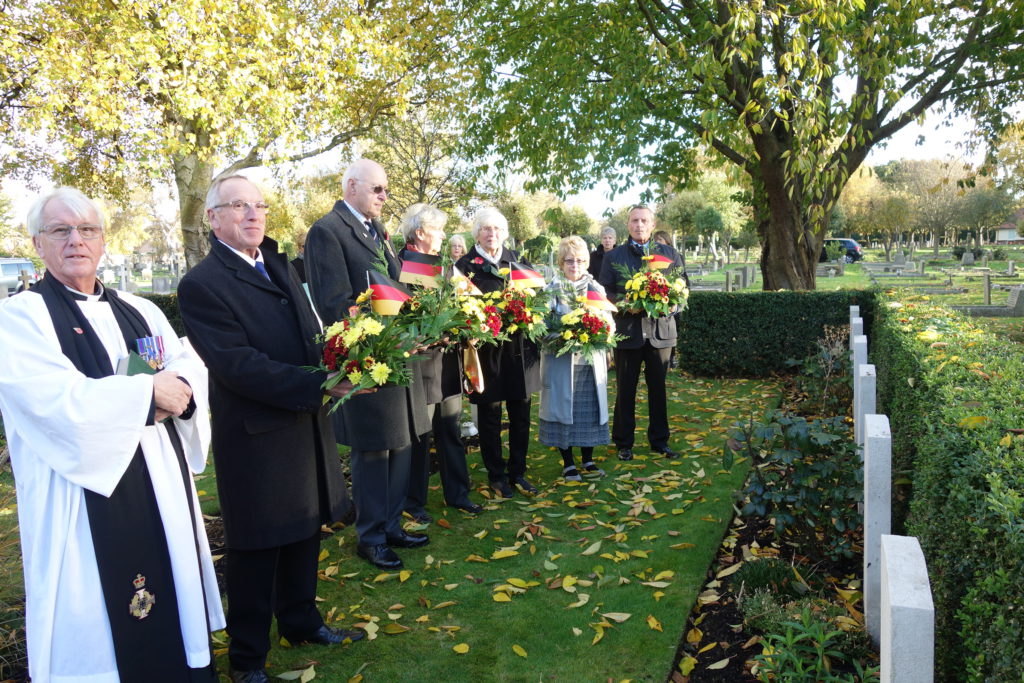 In an act of remembrance timed to coincide with the UK’s Remembrance Sunday ceremonies, members of Felixstowe’s Town Twinning Association gathered at the town’s cemetery to remember those young service people from Germany who also gave their lives in the second world war.

Felixstowe’s cemetery contains the remains of six air and navy personnel from Germany, whose bodies, having been washed up at Felixstowe, were interred alongside those of UK military personnel – their former enemies.

The short moving service was conducted by the Revd. John Aston, in the presence of Mr Francis Cotterell Chairman of the Felixstowe Wesel Association and twelve other members, who laid special wreaths designed to include the German national flag colours of black, red and yellow in flowers and foliage.

Mr Cotterell said “70 years after the end of the war, we felt that it was time to remember those young service people from Germany, who like our own forces, gave their lives in the line of duty, but whose bodies have laid mostly forgotten in a corner of our town’s cemetery”.

Mr John Fuller a member of the Twinning Association, carried out extensive research to find out more about them and “discovered that two aircrew had been close friends, serving in the same squadron but in different aircraft.  On different days their aircraft had been shot down over the UK but by a remarkable coincidence, both bodies had washed up at Felixstowe and been buried side by side”.

Felixstowe Wesel Association encourages and co-ordinates any activity by individuals or organisations to promote, personal, cultural, sporting and commercial links between Felixstowe and Wesel.

The Association has a programme of social activities, publishes Newsletters, arranges annual visits to, and hosts visitors from Wesel.

Membership of the Association is open to individuals or associate membership for groups and organisations.

Wesel, a port and centre for light industry and commerce and former garrison town, has a population of 70,000 is situation on the banks of the Rhine, in Nordrhein-Westfalen not far from the Dutch/German border crossing.