On Friday 3 September at 9.30am, Felixstowe Town Council will fly the Red Ensign at the Town Hall to mark Merchant Navy Day and raise awareness of the UK’s ongoing dependence on Merchant Navy seafarers.

Since 2000, Merchant Navy Day on 3 September has honoured the brave men and women who kept our island nation afloat during both World Wars, and celebrated our dependence on modern day merchant seafarers who are responsible for 95% of the UK’s imports, including half of the food we eat. 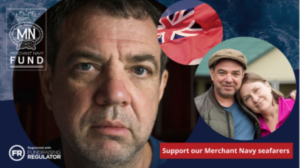 The charity’s president, HRH The Earl of Wessex, has endorsed the campaign, saying: “On this Merchant Navy Day, I very much hope that you will support this campaign by the Seafarers’ Charity to remember the sacrifices, salute the courage and support the future of the personnel of our Merchant Navy. Too often they are the forgotten or invisible service. By raising the Red Ensign you will ensure that at least on this day they are remembered.”

Cllr Mark Jepson, Mayor of Felixstowe said “Felixstowe Town Council is proud to fly the Red Ensign to celebrate Merchant Navy Day, in recognition of the sacrifice and service of all merchant seafarers. As a seaside town, home to Britain’s biggest and busiest container port, Felixstowe is proud to signify the service of those seafarers at our Town Hall.”