The Festival of Suffolk Torch Relay will travel through Felixstowe on 31 May/1 June.

As part of its 588-mile journey, the Festival of Suffolk Torch Relay will travel through Felixstowe on 31 May/1 June.

The torch is due to arrive at Felixstowe Ferry from Bawdsey at approximately 6pm on Tuesday 31 May. The torch will then travel through Felixstowe, carried by our local torchbearer and ‘Jubilee Jewel of Felixstowe’ Civic Awards winner, John Cresswell. The torch will travel along the route depicted below, reaching its destination at the Town Hall to be received by the Mayor of Felixstowe. 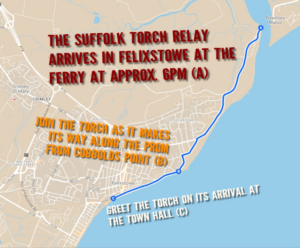 Come along to support our local torchbearer! Line the prom between Cobbold’s Point to the Town Hall and wave your flags in support. Following this phase of the journey, the Festival of Suffolk Torch will depart from Felixstowe on the morning of Wednesday 1 June, later completing the 588-mile journey at The Suffolk Show that afternoon.